The Housing Market Just Hit a Level Not Seen Since 2007

The Housing Market Just Hit a Level Not Seen Since 2007

The financial sting of soaring home prices—up 32.6% over the past two years—was lessened, to a degree, by historically low mortgage rates during the pandemic. Even as prices soared, many buyers’ monthly payments remained reasonable. Those days are behind us: Now that rates have returned to pre-pandemic levels, new homebuyers are starting to feel the full weight of record prices.

This swift jump in mortgage rates puts homebuyers in the worst position since 2007. At least, that’s according to one metric produced by Black Knight, a mortgage technology and data provider.

At current mortgage rate levels, the typical American household would have to spend 29% of its monthly income to make a mortgage payment on the average-priced U.S. home. That's according to data provided by Black Knight to Fortune. Black Knight's mortgage-payment-to-income ratio—which averaged 19.9% during the 2010s—hasn’t topped 29% since 2007. It also marks a massive jump from December 2021, when the ratio was sitting at 24%. 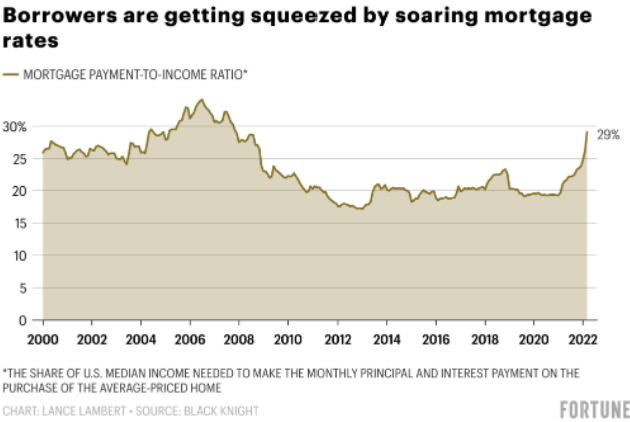 While affordability (or, better put, lack of affordability) levels are beginning to show glimpses of the mid-2000s housing market, it doesn't mean we should pencil in another 2008 housing crash.

During the last housing boom, homebuilders were churning out homes at an unsustainable level. Once the housing market began to slow down around 2006, the market quickly became oversaturated with supply—something that caused prices to sink further. This time around, homebuilders aren't even keeping up with demand and demographics. If a slump does come, industry insiders tell Fortune, it is unlikely that inventory would flip from severely undersupplied into a 2009-like housing glut. 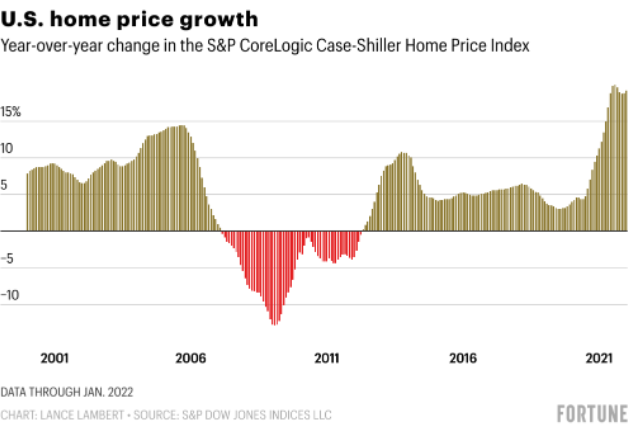 There's a growing chorus of housing economists rooting for soaring mortgage rates to pull some steam out of the housing market. In their eyes, the rate of home appreciation is simply unsustainable, and if it continues beyond 2022, the housing market risks getting overheated. They'd rather we slow to a sustainable level of growth rather than risk a bursting bubble. A paper published last month by the Federal Reserve Bank of Dallas titled "Real-time market monitoring finds signs of brewing U.S. housing bubble" certainly got their attention.

The idea that soaring mortgage rates would pull some steam out of the market makes sense. After all, it's an economic shock to the demand side of the market: Rising rates not only price some buyers out, they also mean some borrowers—who must meet lenders' strict debt-to-income ratios—will lose their loan eligibility.

"While home price appreciation should decelerate, we believe it will remain supported by tight supply. In fact, rising rates themselves will contribute to keeping supply subdued as homeowners will be locked in [and less likely to sell] at their current, lower rates," Morgan Stanley researchers write.

To continue searching, you must agree to the Terms of Use.

For the best experience, please provide your cell phone number and select accept below to opt-in to our Terms & Conditions and Privacy Policy to begin receiving text and voice communications.

or make a new notebook

Verify the value of your home,
maximize your investment and see local market activity.

We just need your phone number to finish creating your account.